This event was originally presented on APRIL 7, 2021 and featured four panel discussions with industry experts and leaders talking about real action and sustained progress on fighting climate change.

You can access the panel discussions recordings free through the buttons above.

Panel 1: What Has the State Actually Accomplished on Climate Change?

While the federal government has pulled back on the fight, California has taken a multitude of actions with the goal of slowing or even reversing climate change—including SB 100 which calls for the state’s energy source to be 100% renewable by 2045. But many of those actions involve setting long-term goals via legislation. To what extent have goals been turned into results? Does the state have the right allies? Is California doing too much on its own, or not enough?

Panel 2:  What Can Local Governments Do to Fight Climate Change?

Panel 3: How Do We Make Our Governance Equal to the Task of Fighting Climate Change?

What strategies and tactics work best for reducing greenhouse gas emissions? To what extent can we rely on our governments to respond, and to what extent do we need the private sector to take the lead? How can the power of the market be used to fight climate change? Is it possible to make money and help the environment? And what opportunities does climate change pose for California in terms of economy, energy and governance?

Panel 4: What Can We Learn From Other Countries and Cities About Fighting Climate Change?

Countries on every continent are being affected by climate change. Some, such as Sweden and Germany, have adopted ambitious plans. And many cities all over the world have sought to make themselves leaders in climate change policies. What can we learn from the successes and failures of other countries and cities? To what extent have various levels of government in other countries been able to cooperate to fight climate change? How have poor and marginalized communities, cities, and countries addressed climate change?

In California, support for fighting climate change is broad and urgent. Wildfires endanger our communities. The rising ocean is beginning to flood our coast. Shifting weather patterns threaten many of the natural wonders that put us on the map, from the sequoias of the Sierra to the snows of Shasta.

But Californians have struggled to translate our desire to stop or mitigate climate change into real action and sustained progress. And we have yet to consider all the ways that pursuing this fight will reshape our communities and regions—in economy, in culture, and especially in governance.

As the 51st anniversary of Earth Day approaches, we gather to examine the details of climate change policy and raise broad questions. How can California and its communities make more progress in the fight, achieving not just reductions in greenhouse gases but profound improvements in how we live? What sort of governance reforms do we need locally, regionally, or statewide for this fight? Is the fight against climate distracting us from other problems—like poverty, housing and education—or can the fight help address other problems? And what could be the unintended consequences and challenges of fighting climate change for our governments? 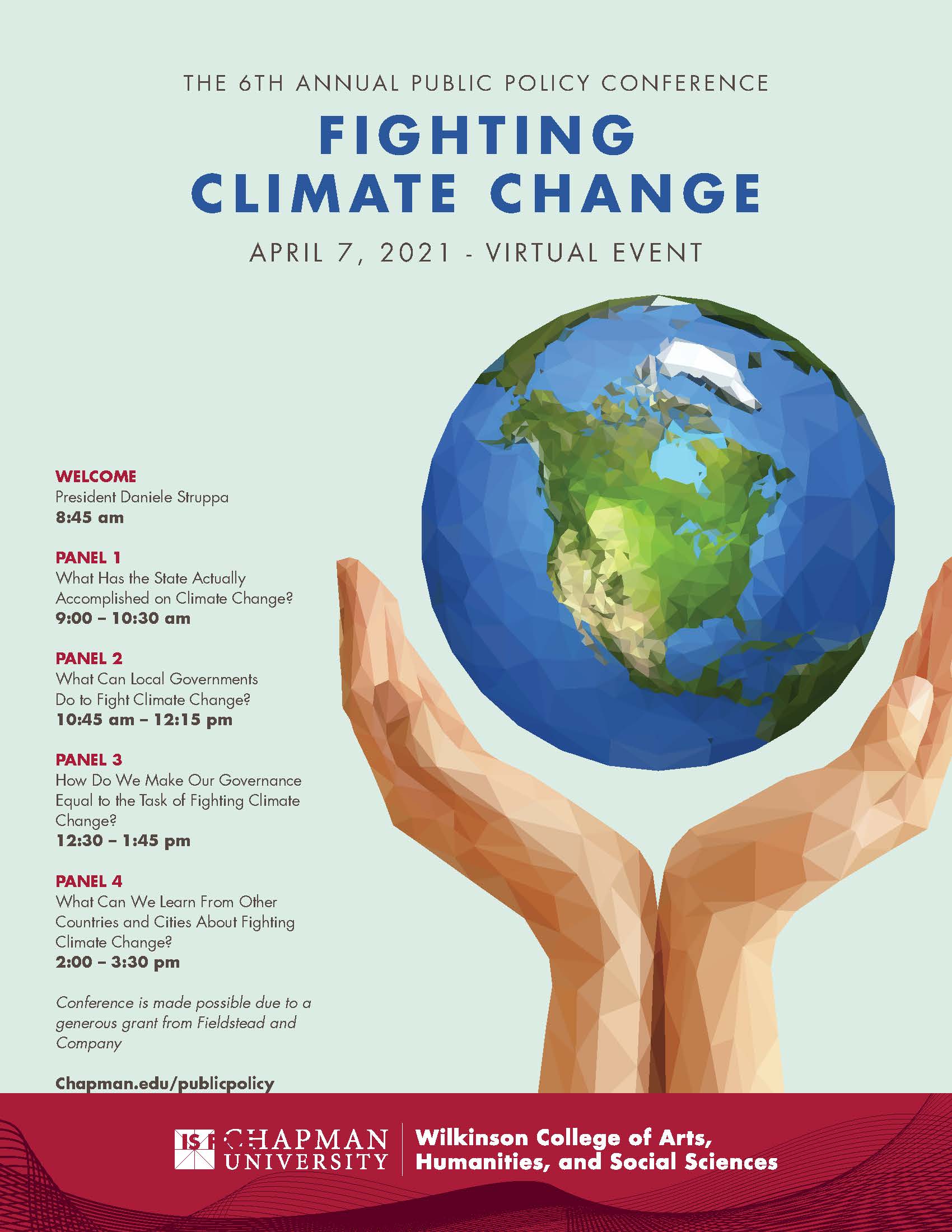 This conference is made possible by a generous grant from Fieldstead and Company.

This conference is made possible by a generous grant from Fieldstead and Company.